The Trumpet Vine is a species of flowering plant native to North America. You can find it in the United States, Ontario, scattered locations in Latin America, and parts of Europe. The plant is known by several names, such as Campsis Radicans - Trumpet Creeper - Hummingbird Vines - Cow Itch Vine. Its botanical name is Campsis Radicans, and it is in the Bignoniaceae family. 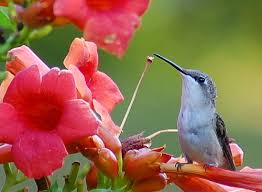 These flowers, like many others like them, attract hummingbirds and other small birds like them. These small animals are often found nesting within the vines and large seed pods left behind from fallen flowers. As these large seed pods mature, they become dry and split. Once this happens, many tiny, brown, two-winged seeds are released and are quickly grown when exposed to natural winter weather conditions. As such a hardy plant, this is capable of withstanding a multitude of extreme weather conditions. These weather conditions include extreme rain, wind, drought, and cold. Along with their hardiness, they have long underground running root systems and thin enough seeds to be carried around in the wind. They are fully capable of surviving and thriving entirely on their own.

An alternative to this is collecting the seeds and growing them with the stratification process. Stratification is a process of subjecting seeds to cold and moist conditions between 1° Celsius and 5° Celsius, or 34° Fahrenheit and 41° Fahrenheit, respectively. The wind also naturally spreads the seeds throughout the area, where they take root in different areas and reappear the following year. In addition, the plant sends long runners underground, allowing it to spread in the following years from planting. This plant is fully capable of seeding itself and thus needs to be kept watch to ensure it does not run wild. This plant (Trumpet Vine - Campsis Radicans - Trumpet Creeper - Hummingbird Vines) is a very hardy, deciduous woody vine and, as a whole, can grow up to approximately 10 m tall, or somewhere around 34 ft. It naturally inhabits woodlands and riverbanks but is also a popular choice for gardens due to its vibrancy and tendency to attract hummingbirds and other small fowl. It is tolerant of deer, drought, and clay soil. It is effortless to grow and wonderful to look at.

The leaves of this plant are opposite each other, long and ovate (also known as egg-shaped), with leaflets arranged on each side of the central stalk (known as being pinnate). New leaves are bright emerald green and mature into a dark green shade. The tops of mature leaves are shiny, while the undersides are dull. Fully mature leaves can be anywhere from 3cm to 10 cm long. During the fall, the leaves will turn yellow and fall off. The flowers of this plant are red to orange in color with a long, yellow underside or throat to them. They bloom in bunches of 4 to 12, sticking out of the main plant. They are long, bright, showy, and shaped like trumpets. These flowers appear and bloom throughout the summer months. This plant (Trumpet Vine - Campsis Radicans - Trumpet Creeper - Hummingbird Vines) is incredibly vigorous and fast-moving. Once the warm weather moves in, the plant grows vast tendrils that will grab onto any surface.

That includes walls, fences, and other structures. It will eventually grow into thick woody stems up to several centimeters in diameter. It grows incredibly well when it has something to climb onto, and therefore a trellis or a large, free-standing fence is recommended when placing one in a garden. A strict pruning regimen is also recommended, as this fast-growing plant can quickly turn invasive. That is even true in northern climates, as this hardy plant can survive and thrive in many areas. Pruning in the early spring months will not prevent future flowers from blooming. As the summer heat wanes, the growth of this plant slows. It becomes less abundant but has been known to return the following year. Cempsis Radicans has many aerial rootlets, which allow it to cling to the structures in which it climbs. Keeping this plant away from brick structures is advisable, as it tends to dig into and weaken the mortar between the bricks.

Plant it far away from other plants, or at the very least, keep the whole plant pruned back and away from them. It can also climb telephone poles and most other structures. A lattice trellis is both a beautiful garden piece and a lot of space for this vine to climb and cling to safely. This plant requires full to partial shade and medium watering. It, as stated, is an incredibly high-maintenance plant. However, it is also an excellent plant capable of bringing many colors and life to any garden. It also creates a natural cover for unsightly features or natural fencing. It does not have any severe disease concerns or insect problems. The only genuine concern is how fast-growing it is and the constant need for trimming and pruning.

These make excellent plants for woodland gardens or provide quick cover over fences, arbors, trellises, and other small structures. It also provides excellent ground cover and can cover more unsightly ground objects such as old tree stumps and large rock piles. They are also great for hot, dry areas due to their hardy nature. It grows best in lean or average soils but can grow in clay as well; This plant will grow big and heavy and aggressive to neighboring plants if run independently. Along with its seeds spreading in the fall wind, this plant has large, underground runners. It will also self-seed itself.

No need to gather yourself unless you want to. In the wild, these plants have been known to choke out any other plant in their way. A large amount of space is recommended. Again, it is best to give it something such as a fence, arbor, or trellis to climb on and be sure to prune it regularly and often. In short, keep an eye on this plant. Prune it often, give it a space to climb, and enjoy the beauty it brings to gardens everywhere.