We ship all plants usps priority mail. They arrive to most locations within 2-3 days. We package all plants to retain moisture to up to 10 days in transit. All plants ships from our warehouses in Tennessee. All plants are grown and shipped from out Altamont (zip) 37301 location. We do drop ship for re-sellers also for those wanting to resell our plants.

All plants are dug and immediately taken to our warehouse and tera-sorb moisture retention gel is applied to the roots and then wrapped in plastic to retain superior moisture for transit. They are placed in corogated cardboard shipping boxes for protection when shipped

Upon receipt of your plants, unpack and unwrap the roots and mist with water. Plant within 24-48 hours. If you can not plant within this time frame, put your plants in a cool location (ex- basement, garage or cellar) and water the roots daily. Cover them back up with the plastic so they will not dry out until you can plant them. After planted, water every evening after the sun goes down for 5 days.

It’s height depending on the moistness of the soil with the more moisture resulting in a higher elevation. It changes colors every few months but is typically maroon-tan, gray, green-red, bronze-lavender, or blue-green. It usually grows in the warmer seasons from late April until between August and October.

Big Bluestem spikes are described as a turkey's foot

The blades are bordered by leaves that begin large at the top where several of the large come together to form what looks like three spikes at the end of the blade. These three spikes splay out into what has been described as a turkey’s foot. These “spikes” grow on the grass in about late summer and grow up to 12 inches in length.

Big Bluestem is the favored grass of cattle

Not all of the leaves are this long. The following leaves get smaller as they go down. The formation of the sheets is also different. After the “spike” at the top, the succeeding leaves form V’s along the blade. It is the tallest of the four native grass species and is the favored grass of cattle. You will also see Big Bluestem referred to as Turkey Feet Grass or Beard Grass. 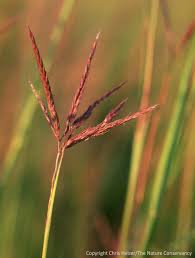 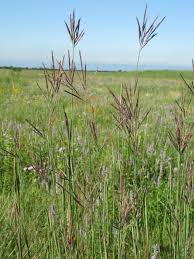 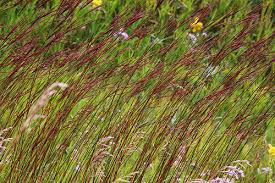 This grassy plant is the perfect hedge plant. This plant is ideal for growing hedges for your home or business. The grasses foliage is thick and green. Instead of buying an expensive fence this cheaper plant is what you should use.

For Coupons and More