Wisteria is loved worldwide for its vigorous growth and the gorgeous cascade of flowers in the spring. With a wide variety of vibrant varieties to choose from, homeowners, landscapers, and property managers cherish the wisteria for its ability to add grace, beauty, and charm to any home.

Getting Down to Science

The beautiful wisteria plant, sometimes spelled wistaria or wysteria, is known to scientists as Wisteria Sinensis. Wisteria is a branch of flowering plants with several related and similar species. Although the wisteria is not used for food or medicine, it is related to the pea family and produces seeds in pods similarly.

Wisteria is a type of flowering vine that climbs by twisting its stems around available support. Amazingly, they can grow as high as 20 meters and spread out across vast swathes of land. The leaves are about 15-35 cm long. In the springtime, the wisteria produces flowers arranged in pendulous racemes that measure from 10-80 cm long. Wisteria flowers come in various colors, including purple, pink, violet, and white.

Botanists divide wisteria into three types: American, Chinese, and Japanese. Both wild and cultivated varieties exist, and dozens of related species are commonly referred to as "wisteria." Your local nursery or plant dealer can provide expert advice to help find the wisteria species right for your needs. 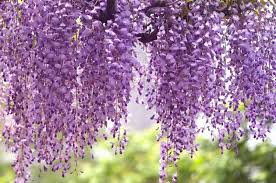 The Fabulous History of Wisteria

Although the origin of wisteria is subject to apocryphal tales, it is generally accepted that the first wisteria ever exported to Europe occurred in 1816. According to the story, an English mariner named Captain Welbank attended an outdoor dinner in China at the palace of a wealthy native trader from Guangzhou. On a warm evening in May, Captain Welbank was entranced by the beautiful flowering wisteria growing on the pergola. Captain Welbank's grasp of Chinese was elementary, and he understood that his host, Zi Teng, called the beautiful plant the "blue line."

Captain Welbank called on the graciousness of his host, and Zi Teng acquiesced, giving the English mariner a packet of seedlings. Upon returning to England, Captain Welbank hastened to Surrey, where he gave the seedlings to his lifelong friend C.H. Turner. The "blue vine" transplanted well and grew eagerly until three years later, when it blossomed for the first time. Botanists, plant lovers, and flower dealers soon began a lively trade in wisteria. It rapidly became a popular flower added to gardens and homes across Britain, the United States, Spain, and Italy.

Confusion over the actual name of this plant arose when early botanists mixed up the true heritage of this plant. Because of its extreme age, wisteria grows natively in both North America and Asia. Captain Welbank's seedlings from China eventually ended up in the hands of the legendary botanist Thomas Nuttall. Although rightly hailed for his many valuable scientific contributions, Nuttal mistakenly thought Welbank's Chinese plant was a new species and decided to name it after the prominent German professor Kaspar Wistar.

Those who followed Nuttal's mistaken classification, predominantly scientists in English-speaking countries, began to call the plant wisteria. But scientists in Italy, Spain, and France recognized that "wisteria" was related to a plant discovered much earlier in the United States. The climbing plant, the American variant of wisteria, was initially named "Glicine." The name was chosen because of its Greek root, which means "sweet," as the plant's perfume was widely recognized for its pleasant aroma. In many European languages, the "blue line" is still known by variants of its original name, "Glicine." 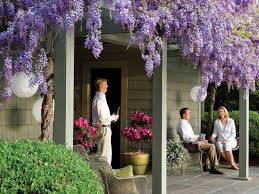 Even though Nuttal erroneously named this "new" plant after a German professor, the German scientific community decided to adopt a different name. Today in the German language, the name for this lovely flowering plant is 'Blaue region,' which translates to 'blue rain.'

You should prepare the soil appropriately, and the support and growing framework should be readied. Once that is done, place the root ball of the wisteria plant at the same depth that it grew in the nursery. You should place the graft union just underneath the soil's surface for those planting a wisteria graft. Fill in the hole and make sure it is firmly and securely packed around the root ball. Add a generous dose of water until the entire area is soaked.

Experts recommend that new plants receive an inch of water a week, whether from natural precipitation or by human intervention. Experienced gardeners recommend allowing the plant to become fully established with shoot and foliage growth before using fertilizer. As with all flowering plants, the first phase of life is vegetative growth, and only later does the plant expend the energy to produce fragrant blossoms.

Wisteria prefers fertile, wet, well-drained soil. Each spring, add a thick layer of compost and mulch under the plant. Ensure proper methods to retain a lot of moisture for the plant.

Because wisteria is such a vigorous, healthy plant, many homeowners and property managers use regular pruning to reduce unwanted growth. Before making any cuts, you must carefully consider the time of year and how the plant is pruned.

Summer Pruning: Experts recommend only allowing one strong "leader" to develop at the end of each main framework branch. Prune away any competing side shoots, and then be sure to attach the remaining leader to its support securely. All-new side shoots beyond the sixth or seventh leaf need pruning as soon as the leaf begins to develop. Pruning the plant will induce new shoots, which you can easily cut back once a leaf or two begin to develop.

Late Winter Pruning: Experienced gardeners recommend pruning all leader shoots to about half or 2/3rds of their length. Any side shoots that have been cut during the summer need to be pruned further until they're only 1-2 inches from their base. Proper winter pruning will allow the branches are forming the permanent framework to grow wonderfully while converting side shoots to beautiful, short flowering spurs.

Maintenance Pruning: Assuming your wisteria has been adequately trained to its frame, a schedule of summer pruning should be strictly adhered to. During the winter, you should keep the leader shoots to a maximum of 4-5 buds apiece. Be sure to inspect the base of the plant and cut off any suckers or new growths.

Tochigi, Japan, is famous for its Ashikaga Flower Park, which hosts an excellent wisteria plant. The enormous wisteria in Japan, this unique flower covers 2000 square acres and draws thousands of visitors to the park every year.

Vaucluse House on the edge of Sydney Harbour in Australia is renowned for being the heart of colonial culture and the former home of William Charles Wentworth, considered to be the father of the Australian constitution. Elegant teas and meals were presented to prestigious guests and visitors at this beautifully preserved mansion elegantly garlanded in wisteria. Tour groups have visited Vaucluse House since the 1920s to see the beautiful wisteria bloom.

The historic Wisteria House in Cape May, New Jersey, was built in the 1840s. Initially serving as a "stop" on the Underground Railroad, escaped enslaved people and fugitives could quickly identify this elegant home by its beautiful festoons of wisteria flowers.

New York's famous Greenwich Village neighborhood has several homes graced by the beauty of living wisteria. One such building inspired 'The Last Leaf,' a poem by O. Henry about an artist gazing through a window at a wisteria plant. Several historic buildings near Washington Square have a heavy canopy of wisteria flowers beautifully every spring. The head of the Greenwich Village Society for Historic Preservation has even gone on record saying that their mission is to preserve more than just buildings but also the fabric of the neighborhood, including wisteria vines. One such historic home is the Renwick House, named after its architect, James Renwick, famous for being the St. Patrick's Cathedral designer.

In 2014, a woman in the Sierra Madre, California, displayed her award-winning wisteria vine at the annual Wistaria Festival. Judges announced the shocking news that her lovely plants are still flowering at a proven 120 years old. Recordkeepers from the Guinness Book of World Records were on hand to document the fantastic triumph for the beautiful wisteria.

The woman with the record-breaking wisteria vine, Nel Solt, had documents that proved that the wisteria was first planted in a one-gallon can with seeds obtained directly from China in 1894. Since then, it was transplanted to the land, where it's grown to an astounding acre in size. The Guinness Book of World Records has documented that Solt's wisteria had an astonishing 1.5 million fragrant blooms at its peak. Thousands of people make the pilgrimage every year to the Sierra Madre to witness this incredible plant in its flowering beauty. 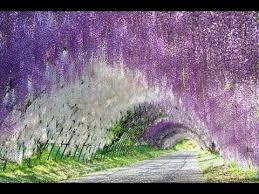 Cultivation Wisteria can be somewhat sensitive to transplantation, and so all due caution should be taken when moving the plant. Sometimes wisteria will adapt well but fail to bloom for several years. Wisteria has a long juvenile period before it will produce any blooms. Proper pruning procedures and properly matched fertilizer will ensure vigorous and healthy blooms. Wisteria is not generally susceptible to insect attack or plant disease. Wisteria needs full sunlight to produce healthy and vibrant flowers. For American growers, wisteria is officially rated by the USDA for Hardiness Zones 4 and up because it can tolerate quite cold conditions. Support and Training for Your Wisteria Wisteria is an excellent plant that you can train to grow in various configurations and designs. Many homeowners and property managers use a wire trellis or an arbor as the perfect support to grow wisteria. To train new vines, first, start by selecting a healthy upright stem. That will become the central leader. Attach the prominent leader to the support and then remove any competing side shoots. As your prominent leader continues to grow, it will start forming side branches that will produce both more shoots and flower buds. Continue to train the prominent leader in the desired direction and use side branches to fit your framework tightly. Always be sure to allow about 18 inches between side branches. When your wisteria is at the right height, pinch off the central leader.