We dig fresh our plants and ship immediately. We ship US Mail, Priority shipping. You will receive a tracking number once your plants ship. All plants will be fine in their packages for up to 3 days after receiving.

We sell only bare root plants. We dip the roots in tera-sorb silicone gel to retain ample moisture for transit and surround with plastic. This is superior protection for plants in transit for up to 12 days.

Open your plants and inspect the same day received. We offer 3 days to report any problems with your order. Bare root plants need to be planted within 2-3 days of receiving unless weather-related problems prohibit planting. Store in a cool place and keep roots moist and covered with plastic until they can be planted. Water for the first week daily after planting.

Partridge Berry Plant is a Beautiful Mat of Evergreen Leaves

When it is detected, grow Partridge Berry Planing wildly in its natural habitat is usually along the sandy, sloped banks of rivers and creeks and throughout the woods. Mitchella repens itself close to the ground and doesn’t climb like many other vines. It rarely gets taller than a quarter of an inch, but it can reach outwards about 12 inches. The heart-shaped or sometimes oval leaves stay their dark green shade all year round.

They are glossy and only get half-inch about wide. Leaves grow in pairs; on a leaf on each side of its stem. Two small, white flowers are tube-shaped and are only half an inch long during the late spring. These pairs of tiny flowers must cross-pollinate to produce fruit. Mitchella repens should grow in moist yet well-drained soil. There should be at least 1 foot of space between plants. Keep new plants watered as they become established. After the initial period, watering is only needed in dry periods.

Wilting leaves may need water to have them perk back up. Like many groundcovers, it can handle the occasional chance that it may be walked upon without effect. In the light of its minor, non-aggressive nature, it is ideal for smaller areas that can be viewed and enjoyed., such as shady areas or around wet areas. The edible berries are less than half an inch wide and have been used as foods for animals and humans alike. Besides acting as a food source, many smaller animals and insects may seek refuge under the leaves. People once used partridgeberry fruit to assist in childbirth in early American history.

Partridge Berry Plant is a Ground-Hugging Vine-like No Other

This plant forms a beautiful mat of evergreen leaves. This mat looks excellent over large areas and under trees; This plant produces fragrant funnel-shaped flowers. The berries are edible for humans but are rather nasty and lacking taste. This plant is native and grows very well.

Partridge Berry Plant has many common names, including its scientific name Mitchella repins and squawberry, along with several others. It is native to the eastern coast and can grow in some parts of Texas. In its native environment and growing naturally, you can find partridgeberry plants in woodland areas and along river and stream banks with sandy soils. It stays next to the ground and doesn’t ascend like many other vines.

It rarely gets taller than a quarter of an inch, but it can stretch outwards about 1 foot. Leaves are heart or oval-shaped, and the evergreen leaves hold their dark green shade all year round. They are shiny and only get half-inch about wide. Two leaves grow opposite each other, one leaf on each side of its stem. Two tiny, white flowers are tube-shaped and are only half an inch long, and bloom in the late spring. These pairs of small flowers must cross-pollinate to generate fruit. It should grow in moist yet well-drained soil.

Allow a foot gap between plants to allow for expansion. Keep new plants watered as the root system matures. After the initial period, watering is only needed in dry spells. Drooping leaves may need water to have them perk back up.

Partridge Berry Plant is most frequently used as a groundcover.

Like many groundcovers, it can survive the occasional treading of the plant without effect. In the light of its small, non-aggressive temperament, it is ideal for smaller areas that can be viewed and enjoyed, such as shady areas or around wet areas.

The berries are safe for humans and animals to eat. They are a half-inch wide. Besides food, the partridgeberry vine also serves as a refuge or shelter for smaller animals and insects. People once used the fruit to treat pains associated with women’s health and childbirth in early American history. Partridge Berry Plants are beautiful. 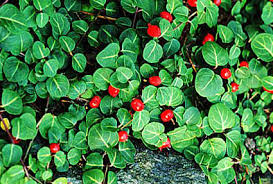 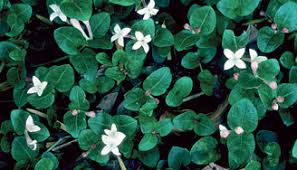